Confederation, denomination of right that Argentina received from 1853 to 1862, even when said territory behaved in fact as if it were a confederation since 1835. The Esatba Confederation was formed by thirteen provinces, with a National Constitution, a Congress and an Executive Power based in the city of Paraná; and on the other hand, the state of Buenos Aires, which although belonged to the Argentine Republic, was autonomous with respect to the Confederation. Both entities competed and attacked militarily, and differed from the cultural, economic and social point of view. The coins were issued by the National Confederation Bank in 1854. As it was impossible at that time to mint the coins in the two Confederation mints, they were authorized to be contracted in Europe, and issued for a total amount of 100,000 pesos in the values ​​of 1, 2 and 4 cents. The expression "cents" appeared for the first time in the monetary history of Argentina. The pieces carried, on its obverse, a sun with the circular legend CONFEDERACION ARGENTINA, and in the center of the reverse, the value and the perimeter legend TESORO NACIONAL-BANCO. These coins were sent to the circulation on January 18, 1855, referring to the other Argentine provinces thereafter. In 1856, the copper was used throughout the territory of the Confederation, except, obviously in Buenos Aires, so these coins are the first true national character since the coinage of 1813 and 1815.
Wikidata: Q738144 Read more 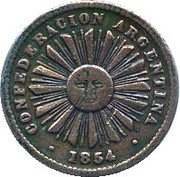 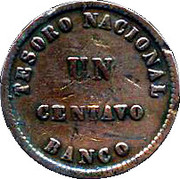 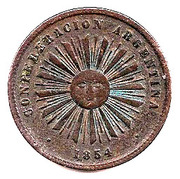 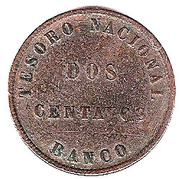 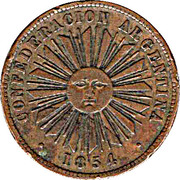 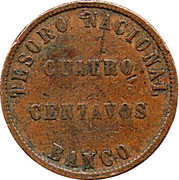