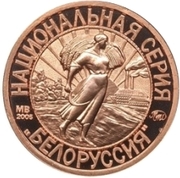 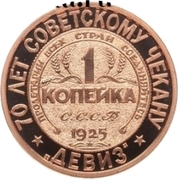 The image of a coin.

In 1925 the People's Commissariat of Finance of the USSR decided to stamp out new coins with the denomination of 1, 2, 3 and 5 kopecks depicting the national symbols of the republics that make up the Soviet Union: 1 kopeck - Belarus, 2 kopecks - Ukraine, 3 kopecks - Central Asian republics (Turkmenistan and Uzbekistan), 5 kopecks - Transcaucasian republics (Azerbaijan and Georgia).
In the series "70 years of Soviet coinage" the most interesting sketches were selected from the numerous projects of coins of the 1925 competition. On their basis on the Moscow Mint in 2007 this copper coins are manufactured, allowing to see what the national issues of national coins could look like, it was the first experience of such issues, embodied today in the series of bimetallic 10-ruble coins "Russian Federation "With images of the symbols of the republics and regions of country.

A complete set of 15 sets (60 coins). In capsules placed in three plates. 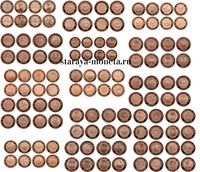 » Buy exonumia from Russia at eBay