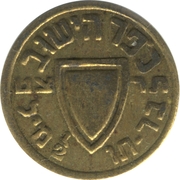 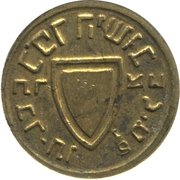 Shield dividing date and legend around.

Uniface.
Struck in the Plitz factory in Holon.
The British Government did not object to the issue of these tokens which circulated until the 1950s as coins.

"Kofer Hayishuv" was an emergency taxation fund, established in 1938 for the purpose of financing security and other needs of the Jewish community ("Yishuv") in British Mandatory Palestine. The Kofer Hayishuv tax was levied on a multitude of services, for which a variety of receipts were issued, mostly in the form of paper chits or stamps. Only one metal token was issued, in 1939, which quickly became a de facto means of payment of general services, such as public transportation provided by Jewish-owned bus cooperatives. With the establishment of the State of Israel in 1948, the use of Kofer Hayishuv tokens was abandoned.

A member of this site wants to exchange it: G.IG.