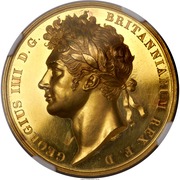 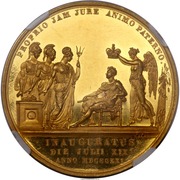 George Augustus Frederick Hanover became King George IVth of England on the death of his father George III on January 29th 1820. His Coronation was not held until July 19th 1821. George IV greatly enjoyed planning events. His Coronation would be his grandest. He wished to outshine Napoleon's coronation.

The new king selected costumes for all the participants that were inspired by Tudor styles. He spent 24,000 pounds on a Coronation robe of crimson velvet with gold stars and ermine trim costing 855 pounds with a train that stretched 27 feet. He rejected the traditional Coronation crown, St. Edward's Crown, and commissioned a new crown adorned with 12,314 hired diamonds, rented from Rundell & Bridge at a cost of £6,525, or a rate of 10% of their actual value (£65,250). The diamonds encrusting the crown were set in a new style that allowed light to enter through the open back of the setting, as are modern jewels. The new king also acquired the large blue diamond, which would become known as the Hope diamond. It had been looted from the French crown jewels in 1792. The gem turned up in England as a precut stone, after the statute of limitations had run out in 1812, in the possession of a diamond merchant. George IV purchased the stone in 1820.

» Buy exonumia from the United Kingdom