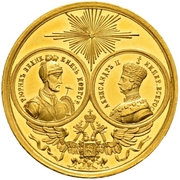 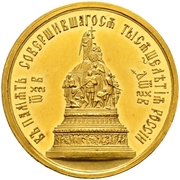 Translation: In memory of the accomplished of 1000 years of Russia

The Millennium of Russia is a bronze monument in the Novgorod Kremlin. It was erected in 1862 to celebrate the millennium of Rurik's arrival to Novgorod, an event traditionally taken as a starting point of the history of Russian statehood.

» Buy exonumia from the Empire of Russia