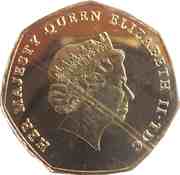 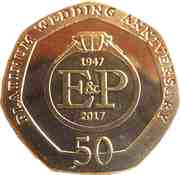 Coin is unusual in having a broad rim on its reverse, similar to those on UK 20 pence coins, while the obverse has a simple raised edge as on UK 50 pence coins.
It is also technically undated :  the date 2017 is part of the description of the commemorated event (as is the date 1947) and is shown in small format digits, and is not on the outer perimeter of the coin.
The coin is slightly smaller and slightly heavier than all other UK and Regional 50p coins.