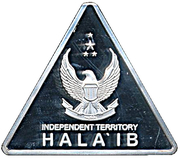 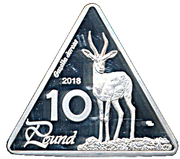 Hala'ib, or Halayeb (Arabic: حلايب‎), is a Red Sea port and town, located in the Hala'ib Triangle, a 20,580 km2 (7,950 sq mi) area disputed between Sudan and Egypt. The town lies on the southern tip of what Egyptians refer to as the Red Sea Riviera and the north eastern corner of Sudan's Red Sea State and is near the ruins of medieval ‘Aydhab. De facto control of the area is held by the Egyptian government.

This unofficial triangular 2018 dated 10 Pound coin was recently issued for the “Independent Territory of Hala’ib”.  Though independence might solve the dispute, it is highly unlikely that Egypt or Sudan would allow it to happen.  One side features the eagle emblem of Independent Halab.  The other side pictures a Dorcus Gazelle (also known as Ariel Gazelle), which is native to the region.  The silver-plated Proof coin has a mintage of only 150 pieces made in China.

A member of this site wants to exchange it: unucoins