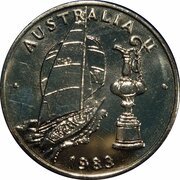 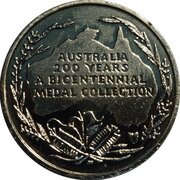 Map outline of Australia in wreath. Inscription in 4 lines and mintmark below the wreath.

Issued as a free giveaway over a period of three weeks with various Australian Newspapers in 1988 to commemorate Australia's Bicentenary. A total of 20 medals are included in the set. A collector album/folder was also included with the first coin to house the set.

The medals were based on three main themes, "Discovery & Settlement", "An Emerging Nation" & "The Modern Era".

As an educational item for a school project or just those looking to collect Australian memorabilia it is nice item to own.