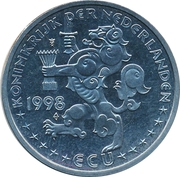 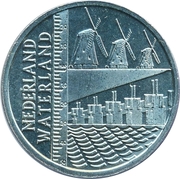 Heraldic lion of the Kingdom of the Netherlands. Lion rampant holding a sword and 7 arrows. Lettering and 12 stars around the circumference.
Bow privy mark.

Images of three windmills above image of a storm surge barrier and the sea. Lettering and image of a depth gauge left.

Environmental considerations are becoming increasingly important to the Dutch in the battle against the sea.
They give priority to the preservation of landscape, nature and culture and, where possible, restore natural environments to their original state.