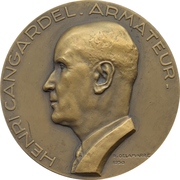 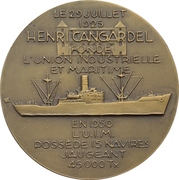 Raymond Delamarre, born June 8, 1890 in Paris and died February 28, 1986, is a French sculptor and medalist. A pupil of Jules Coutan at the École des Beaux-Arts in Paris, he was part of the generation of artists mobilized by the First World War: wounded in September 1914 and prisoner in Bavaria, he returned to Paris in 1919 and won the first Grand Prix of Rome in sculpture.

Plain with mintmark and inscription.