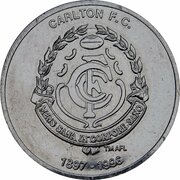 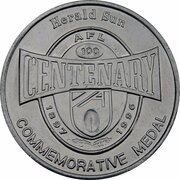 Crest of the Carlton AFL Club

Translation: A SOUND MIND IN A SOUND BODY

The AFL Logo for the Centenary Football Season of 1996

This Token was part of a Seventeen Token Set that was able to be placed in an album. The Tokens were celebrating the Centenary of the Australian Football League. Sixteen Australian Rules Football Clubs were each represented on a token.

This Token was representing the Carlton Blues Football Club