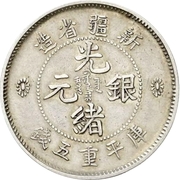 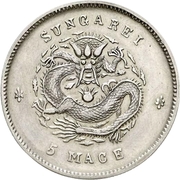 Dragon with pearl at centre surrounded by English legend.

While Krause lists these as being struck in 1906, recent evidence shows these were made from Otto Bleh dies, who struck some patterns for varies Chinese provinces between 1897 and 1899. Denominations of 1 Mace, 2 Mace, 4 Mace, and 1 Yuan (7 Mace and 2 Candareens) are known, with the last two denominations only known by patterns.

Only the 1 Mace and 2 Mace denominations were released into circulation, with very few known to exist today.

The 5 Mace examples are considered fantasies.