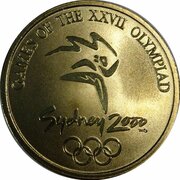 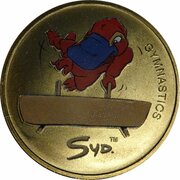 The Sydney Olympics Logo with the words "Sydney 2000" with a trademark and the Olympic Rings below that.

Syd on the Pommel Horse

Issued as part of a set of twenty eight (28) different Olympic Event Tokens to help celebrate the 2000 Summer Olympics held in Sydney, Australia.  Three different Mascots were used to highlight the different sports held at the event. "Syd" the Platypus was featured on eleven Tokens, "Millie" the Echidna  was featured on ten Tokens and "Olly" the Kookaburra was featured on seven Tokens.

The token came in various packaging, with a legal tender $5 coin in a dual coincard, by itself in a coincard, or as part of a 28 Token set with a large hardback folder album. 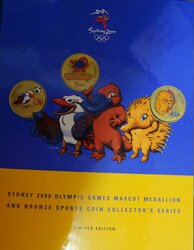 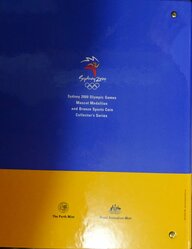