It is located in the northwest of the country, in the Norte Grande Argentino region, bounded on the north by the Province of Salta, on the east by the Province of Santiago del Estero and on the south and west by the Province of Catamarca. It has an area of ​​22,524 km² and a population of 1,448,188 (last census 2010). Its capital is the city of San Miguel de Tucumán. Its foundation was produced in Ibatín, on May 31, 1565, by Diego de Villarroel. In 1814 the Province of Tucumán was also included, by the jurisdictions of Catamarca and Santiago de Estero. In 1819, when a new constitution was approved for these towns under the government of General Bernabé Araoz, a new political-administrative entity is created under the name of "Republic", which affirms the integration of these provinces in a region of more than 250,000 km². In the years 1820 and 1821, the province of Tucumán during the government of Bernabé Aráoz, officially installed a mint that coined pieces of the Macuquino type imitating those of Potosí, although of better quality. Launched into circulation, a large number of counterfeits appeared very soon, some in low silver and others directly in silver copper. This prompted Governor Aráoz to give a forced course to all currencies, whether authentic or false, a measure that further discredited these issues, whose face value was reduced in 1824. Later, the new governor Javier López, ordered his withdrawal from circulation. Apparently, only pieces of the value of two reales (pesetas) were minted. The official type of the so-called "moneda federal de Tucumán", shows the brand of the mint TN inside a small oval, and anomalous dates. The counterfeits, in turn, present notable differences between themselves and especially in their silver alloy. They look deformed, with anomalous castles and lions. All the Tucumán specimens have anomalous dates, the most common being the ones with the number 752. Within the set of coins classified as Tucuman, the ones with date 758 that show castles and lions totally different from the rest of the mintings stand out. The difference in the figures of the date and in the good silver alloy quality is noticeable. For this reason, they are included in a separate item under the denomination of anomalous type of Tucumán coins.
Wikidata: Q44829 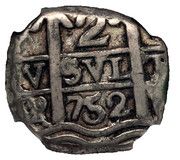 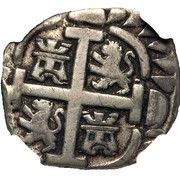