Danish India refers to small areas under Danish control along India's coastline. The first settlements emerged in 1620, which came from the Danish East India Company looking for trade. The company did not do well, causing it to be abandoned in 1648 and re-started in 1670. With the second Danish East India Company, trade was much better, and the company grew substantially. Even so, as a result of the Napoleonic Wars (1803–1815), Britain destroyed the Danish fleet, devastating Denmark's trade. The Danish colonies in India began to decline, and the last areas were sold to Britain in 1869.
Wikidata: Q912382 Read more 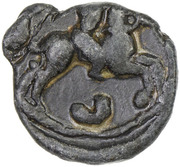