Texts in English and French. The number "2" is printed in waves of various colors. In the center at the top is the Coat of Arms of Canada. On the right is a portrait of Elizabeth II, Queen of England and the Commonwealth. To the right of the portrait is a view of the Parliament of Ottawa.

In the middle, a pair of robins in a field of grass. In the background, the word "CANADA". Below, the serial number printed twice in black with the bar code for the blinds.

Replacement :
→ (AAX0000000) : Banknotes that have been issued to replace banknotes that were damaged or destroyed before they were put into circulation. The letter "X" is added as the third letter.

General information :
→ This was the last $2 banknote to be issued in Canada. This note was issued on September 2nd, 1986, and was withdrawn from circulation on February 16th, 1996. Three days later, on February 19th, 1996, the new $2 coin (commonly called the "toonie") was put into circulation. 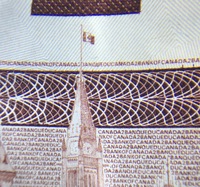