Texts in English and French. On the left side, the issuing institute and the coat of arms of Canada. The portrait is that of Sir Henry Charles Wilfrid Laurier, statesman, Canada's seventh Prime Minister from 1896 to 1911 and the first Francophone to hold this position. In the center is a front view of the West Block of the Parliament Buildings in Ottawa with a legend to his right. Below the legend is the note's face value "5" and above it a Canadian flag. The multicolored printing is dominated by blue/yellow.

The image depicts some of the sporting activities of the Canadian during winter: Children playing hockey, another boy sledding, and a final child learning to ice skate with an adult. In the middle is a bilingual quote.

Mention "Replacement" :
→ Notes that were issued to replace notes that were damaged or destroyed before they were put into circulation.

Knight/Dodge (Prefix: JHS) - Printed in 2001 - ULTRA RARE (Experimental banknote) :
→ "The Bank of Canada inadvertently issued a $5 note with this serial number [JHS] during a note exchange event to mark the launch of the new $5 note in March 2002. That note was part of the first print run of the Canadian Journey $5 note, and was genuine. While we cannot confirm wheather there may be more notes with the serial number prefix "JHS" in circulation, no evidence exists at this time to suggest so." 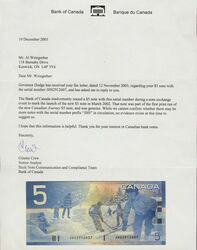 Members from this site want to exchange it: Serial_Number_8, Skahaboy, Eskimo, Smiley1, jmd