А portrait of the poet Ivan Vazov at left, village in underprint.

A lyre and a laurel wreath (literary prize bestowed on him in 1895).

Translation:
Two Hundred Leva
Bulgarian National Bank
For forgery the guilty are punished according to the law 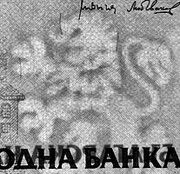 » Buy banknotes from Bulgaria at eBay