Portrait of Abraham Lincoln at center.
Register's and Cashier's signatures at left.
Treasurer's and President's signatures and Treasury Seal to right. 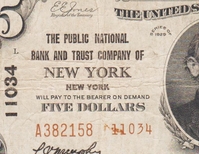 Type 2-the Charter number printed with the serial number