Manuel L. Quezon, Coat-of-arms of the Commonwealth of the Philippines, Defiction of two white paper with the words "WIKANG PAMBANSA" and "SALIGANG BATAS 1935", Seal of the Bangko Sentral ng Pilipinas.

Malacañan Palace as seen across the Pasig River 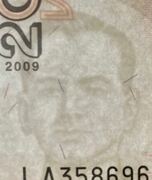 REMARKS:
Manuel L. Quezon was the first president of the Commonwealth of the Philippines. Under his tenure, the country officially declared "Filipino" as the national language, which was included in the passing of the 1935 Commonwealth Constitution. He was also the first president of the Philippines to take residence and office in Malacañang palace, a historic house built during the Spanish era.

In 2010, the Bangko Sentral ng Pilipinas, started issuing the New Generation Series banknote. this design continued to be printed up until 2012 as the old paper stock ran out but was demonetized only on 2017.