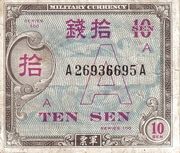 Black on light blue underprint and magenta text, large A in underprint.

Initially printed in the U.S.A., subsequently printed in Japan.
A-Notes were never legal tender for Japanese citizens and circulated only a few weeks in Japan in 1946.
They were also legal tender in Korea from September, 1945 until June, 1946.

A member of this site wants to exchange it: squash70

» Buy banknotes from Japan at eBay