Blue on polychrome in calcography and offset.
In the center, wrapped in a decorated frame, the portrait of Joaquim Marques Lisboa, Marquês de Tamandaré (1807-1897), flanked by numerals 1.
Diagonally crossing the body of the note, anonymous autograph of the official responsible for the conference.

Translation:
Republic of the United States of Brazil
The bearer will be paid the amount of
One Cruzeiro
1 at the National Treasury 1
Marquis of Tamandaré
Amount received
American Bank Note Company.

Blue, in calcography.
In the center, image far from the Rio de Janeiro Naval School. 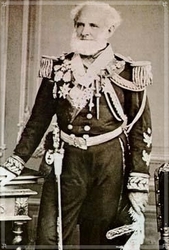 There is no indication of print.