In the center, wrapped in a decorated frame, the portrait of Manoel Deodoro da Fonseca (1st President of the Republic 1889 - 1891), flanked by the numerals 20.
Color: blue.

Translation:
Republic of United States of Brazil
will be paid to the carrier of this amount of twenty Cruzeiros
in the National Treasury
Deodoro da Fonseca
Amount Received
American Bank Note Company.

In the center, the allegorical and pictorial representation of the Republic, a painting by Cadmo Fausto de Souza.
Color: red. 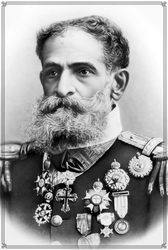 (2) Allegory of the Proclamation of the Republic, by Cadmo Fausto de Souza