Official name of Taiwan is Republic of China. Denomination in Chinese is written as Yuan, officially in English it is New Taiwan Dollar.

Denomination in Chinese is written as Yuan, officially in English it is New Taiwan Dollar. The year of issue is given in the Chinese Republican calendar; year 93 corresponds to 2004 in the Gregorian calendar.

Issued as part of the Fifth series of the New Taiwan dollar by the Central Bank of the Republic of China (Taiwan), and was issued into general circulation on July 20, 2005. This is the upgraded issue with a holographic stripe and a change in background color to a darker shade of brown to avoid confusion with the 100 New Taiwan dollars banknote.

UV activity on both sides: 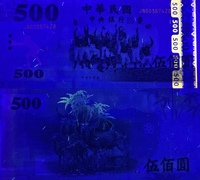 Members from this site want to exchange it: bdito222, gyoschak