Blue on polychrome chalcography and offset.
In the center, oval medallion with the figure of Pedro Alvares Cabral (1467/68-1520), discoverer of Brazil.
Above couplet "REPÚBLICA DOS ESTADOS UNIDOS DO BRASIL" (Republic of the United States of Brazil), surmounting the words "SE PAGARÁ AO PORTADOR DESTA A QUANTIA DE" (will pay to the bearer of the amount).
Below the inscription "MIL CRUZEIROS / VALOR RECEBIDO" (One Thousand Cruzeiros / Amount Received).
On the left, serial number (above) and the sequence number (below).
On the right, the sequence number (above) and serial number (below).
Diagonally on any note, the anonymous autograph official responsible for conference.

Translation:
Republic of the United States of Brazil
will pay to the bearer of the amount
in the National Treasury
Pedro Alvares Cabral
One Thousand Cruzeiros
Amount Received
American Bank Note Company.

Orange in calcography.
Reproduction of the painting "Primeira missa no Brasil" (First mass in Brazil), 1860, by Victor Meirelles (1832-1903) on the caption "PRIMEIRA MISSA" (First mass), between the label "REPUBLICA DOS / ESTADOS UNIDOS DO BRASIL" (Republic of the / United States of Brazil).

Proof note sample (P# 141p)
Not dated, but it is Estampa 1ª, which was issued at 1943, without serial numbers.
Choice Uncirculated. Issued for test and approval, fresh and crisp antique banknote.
Specimen incompletely printed without overprints, serial numbers, series or dates.
Each side shown. This is a single printed note and not two halves. 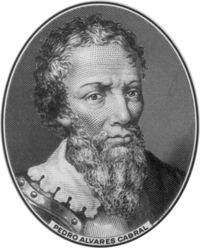 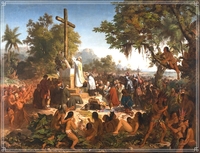 Proof banknote
A proof note is printed with a purpose of establishing the quality, design and other properties of the printing. Proof notes may be unfinished in design and may be missing certain characteristics (serial number, colour, and printing phase) that one would expect to see on a finished note. Proof notes are usually made to aid the printer and the issuing authority with the selection of design, colour, etc. A proof note can sometimes bear a 'specimen' overprint. Cancellation holes may be present. Proof notes are usually scarce and unavailable to the public.

more... Republic of the United States of Brazil and Cruzeiro (Cr$)