Declaration of Philippine Independence of June 12, 1898.

Translation:
Declaration of the Independence of the Philippines on June 12, 1898
Five pesos

Issued by the Bangko Sentral ng Pilipinas as part of the New Design series, and was issued into general circulation in 1985. No longer produced upon the launch of the 5-piso coin as part of the Improved Flora and Fauna series. Demonetized and was fully withdrawn from circulation on December 29, 2017, after the release of the New Generation Currency series banknotes in 2010. 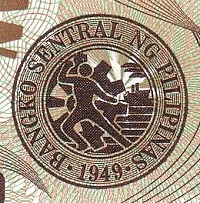