On the right, in a circle, the effigy of the Republic looking to the left.

On the left, project of the building of the Amortization Box.

Effigies of the Republic. 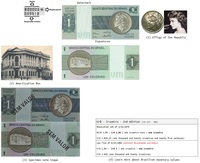 (1) There is a "legend" that states that the recorder of 1970s banknotes and coins, Benedicto Ribeiro, was inspired to create the effigy of the Republic adopted on this banknote and coins of the period in Tonia Carrero, brilliant Brazilian actress and very successful in occasion and of which the recorder was a fan.