Translation:
Bank of France
One hundred francs
Payable in cash, at sight, to the carrier

Luc-Olivier Merson (21 May 1846 – 13 November 1920) was a French academic painter and illustrator also known for his postage stamp and currency designs.

Personifications of Work (blacksmith on the left) and Fortune (woman and child with cornucopia on the right). Golden moldings.

Translation:
Bank of France
100 francs
Articles 139 of the penal code punishes for forced labor those who counterfeit or forge the tickets banks authorized by law, as well as those who will have used these counterfeit or falsified tickets.

Luc-Olivier Merson (21 May 1846 – 13 November 1920) was a French academic painter and illustrator also known for his postage stamp and currency designs.

Profile heads of CERES and MERCURY 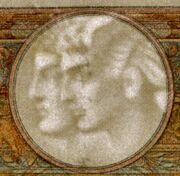 Explanation on the note 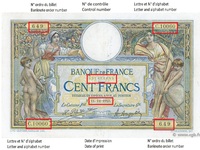