Painting "The Russian Squadron on the Sebastopol Roads" (by Ivan K. Aivazovsky)
"Monument to the Scuttled Ships", Sevastopol Bay (by Amandus Adamson)
layout of Sevastopol city
"Memorial to the Heroic Defense of Sevastopol in 1941-1942", Nakhimov square (by I. Fialko and V. Yakovlev)
St. Vladimir’s Cathedral

Big Khan's mosque in Khan's Palace, Bakhchisaray, Crimea. This mosque is a part of the Bakhchisaray Palace. It is one of the largest mosques in the Crimea and one of the first buildings of the Khan's palace.

Radio telescope RT-70 near the town of Yevpatoria

Detailed information can be found in QR code on obverse in lower right corner.  Scanning it directs you to http://www.cbr.ru/ks/ 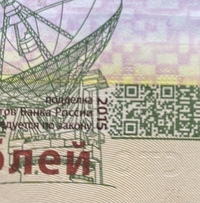 » Buy banknotes from Russia at eBay