Mainly identical with type 1 https://en.numista.com/catalogue/note207565.html but there are added more security features.
Red and Black on Green underprint.
At the right side a theatrical mask and portrait of Famous Actress Johanne Luise Heiberg(1812-1890), with text ”Johanne Luise Heiberg” and a flower
Upper Left the Red Rosette are replaced with a round hologram with”CC”(for two hundred) or a Lion above 200. The Numbers and signatures are printet with luminous colors. Furthermore the main motif from the reverse is printet with ultraviolet color and can only be seen in ultraviolet light.

Identical with type 1: https://en.numista.com/catalogue/note207565.html
Green underprint.
At the Left a Lion inspired by a stone relief from the apse of Viborg Cathedral Jutland. Behind which is a Round rosette in gren and grey.
At the Right side a orange Circle surrounding the watermark. In the orange Circle is the serial specification. Inside the circle a lot of small orange circles.

Portrait of Johanne Luise Heiberg.
Black hidden Security thread.
Partly wisibel metalic security thread ”window thread” with ”200 KR”
Microprint. On the Obverse is ”200 KR” printet around the watermark in microprint, and several other places microprint are used in different sizes. 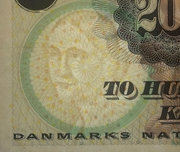 Notes with Prefix B905 and C308 was never released for circulation.