Light and dark blue on multicolor
The front side of the 100-kroon banknote features LYDIA KOIDULA (1843–1886) – an Estonian poetess, playwright and one of the prominent figures of the national awakening movement in the 19th century. Koidula was the founder of Estonian drama and theatre. She took part in organising the first Song Festival in 1869. Koidula was also a journalist but she is especially known as a romantic patriotic poetess. To the right of the portrait, a singing nightingale is presented. The nightingale represents Koidula’s most important collection of verses: “Emajõe Ööbik” (The Nightingale of the Emajõgi River).

Stormy waves and a limestone cliff. Limestone is Estonia’s national stone. The Estonian limestone cliff is a unique natural formation. The North Estonian cliff runs from the cape of Pakri in the west to the town of Narva in the east. The highest point near the village of Ontika is 56 metres high. 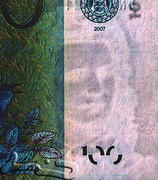 Members from this site want to exchange it: kambu, Ollisaarinen, Rasmus20