Translation:
Republic of United States of Brazil
will be paid to the carrier of this amount of twenty Cruzeiros
in the National Treasury
Princess Isabel
Amount Received
Thomas De La Rue & Company, Limited, London.

In the center, the allegorical representation of the Aurea Law, a painting by Cadmo Fausto de Sousa
Color: violet. 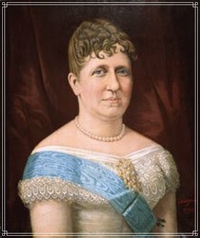 (2) Allegory of the Aurea Law, by Cadmo Fausto de Souza