In the center, wrapped in a decorated frame, the portrait of José Maria da Silva Paranhos (Barão do Rio Branco), flanked by the numerals 5.
Color: brown on multicolor.

Translation:
5 5
Republic of United States of Brazil
will be paid to the carrier of this amount of
Five Cruzeiros
in the National Treasury
5 5
Baron of Rio Branco
Amount Received
Thomas De La Rue & Company, Limited, London.

In the center, the pictorial representation of the Conquista do Amazonas, painting by Antonio Parreiras.
Color: brown 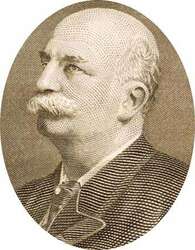