Translation:
Republic of United States of Brazil
will be paid to the carrier of this amount of one hundred Cruzeiros
in the National Treasury
200 200
Two Hundred Cruzeiros
D.Pedro I
Amount Received
Thomas De La Rue & Company, Limited, London. 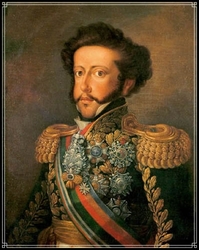