Blue on polychrome, in calcography and lithography.
In the center, an oval medallion with the effigy of José Maria da Silva Paranhos Júnior, Barão do Rio Branco (1819-1880), flanked by the nominal value 5.
In the upper left and lower right corners, the overlapping impressions were applied in blue in the form of rose, with the inscription "CASA DA MOEDA / 5 / CRUZEIROS" (Mint / 10 / Cruzeiros)

Translation:
Republic of the United States of Brazil
In the National Treasury will be paid to the holder of this amount of
Five Five Thousand Réis Five
Mint 5 Cruzeiros
Amount Received
American Bank Note Company.

Sepia, in calcography.
In the center, a panel with the figure of a child between two seated women (allegory of Industry and Commerce). 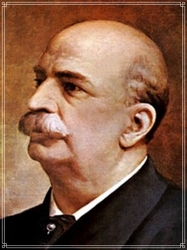 (2) Child between two women (allegory of Industry and Commerce) 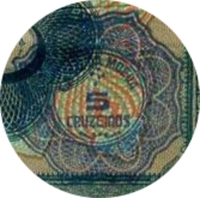 (3) Round stamp of 5 Cruzeiros