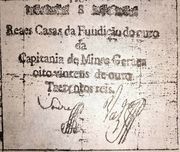 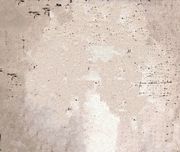 Black in lithography on white paper.
In the center, at the top, the numerical value between two vignettes.

Due to the inexistence of small coins that could be exchanged for small amounts of powdered gold, D. João established that the same should also be done with printed tickets in the amounts of 1, 2, 4, 8, 12 and 16 vintens of gold, each vintém corresponding to 37 and 1/2 reis. Issued in large quantities, these tickets had wide circulation in the captaincy of Minas, integrating their circulating environment. Subsequently, due to the appearance of a large number of counterfeit tickets, their issuance was suspended.

To know more... United Kingdom of Portugal, Brazil and the Algarves and Réis (Rs).