Black on white, in calcography.
On the left, Weapons of the Empire.
In the center, the figure of an indigenous couple next to a Christian cross, making allegory of Brazil's independence.
On the right, reference to the decree of June 1, 1833.

(1) Indigenous couple next to a Christian cross, making allegory of Brazil's independence. 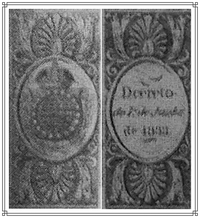 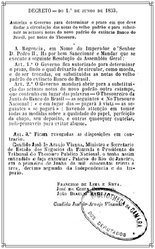