Translation:
National
Bank of Cuba
Three Pesos
Convertible Pesos
Totally guaranteed with international values
of free convertibility. Can be swapped to free convertible
currencies at the National Bank of Cuba.
Monument to
Ernesto "Che" Guevara ("Che" is Argentinean expression meaning like "Hey, you!"

Arms at center, country name on top, face value in numbers and letters on top right, only number on lower left, below 5-pointed star.

The monument shown in banknote is part of the Guevara's Memorial, with official name Conjunto Escultórico Memorial Comandante Ernesto Che Guevara (Sculpture complex, Commander Ernesto Che Guevara Memorial), placed at Santa Clara, that includes this high statue, 6.7m. high, placed on  8m. basement; a big wall, with images of Gevara and fellows; and 2 smaller monoliths, smaller showing a qupte from Guevara, and the teller one with the letter he left to Fidel Castro when left Cuba. Sculptures are placed over the Che Guevara Mausoleum, where are buried his remains and of several other fellows. Mausoleum is also connected to Guevara's museum, showing several articles used by him and during the Revolution, as well as images of different moments of his life.
Placement of the Complex was selected as in this city Guevara's forces defeated on December 31st, 1958 last remaining resistance of Fulgencio Batista, current dictator of Cuba. 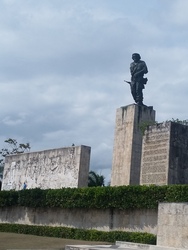 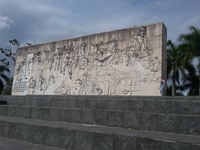 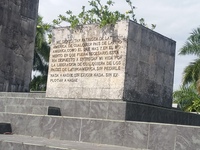 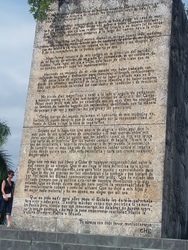