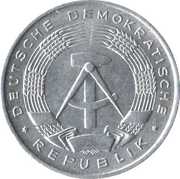 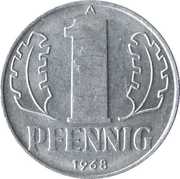 State emblem of the German Democratic Republic (hammer and a compass, surrounded by a ring of rye with a ribbon displaying the flag colors: black, red and yellow) with the country name around the rim

From 1977 onwards, the arms of the German Democratic Republic on the obverse slightly smaller.