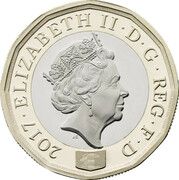 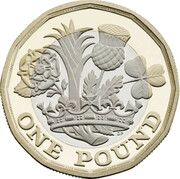 Fifth crowned portrait of HM Queen Elizabeth II right, wearing the George IV State Diadem, with latent (hologram-like) image below the bust and denomination as incuse micro-legend around the edge.

An English rose, Welsh leek, Scottish thistle and Northern Irish shamrock emerging from one stem within a royal coronet, with the minting year as incuse micro-legend around the rim.

Launched for circulation by the Royal Mint on March 28th, 2017 as 'The world's most secure coin'. 500 million circulation issues were struck with a 2016 date but were not released until 2017.

Sp#J39A (2016): A special edition 2016-dated two-coin set was released to commemorate the last round pound and the new 12-sided design in a Brilliant Uncirculated finish. The reverse of the 12-sided £1 coin features the Royal Mint's ‘cross crosslet’ mintmark with 9,850 packs sold in 2016. 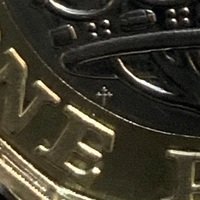 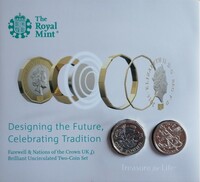 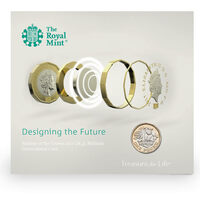 The 'latent image' on the obverse is like a hologram that changes from a ‘£’ symbol to the number '1' when the coin is viewed from different angles.

Reports have been received of 2017-dated coins with two different latent images, having either 24 or 20 vertical lines.

There are a handful of known mules that show the obverse dated 2016 but have 2017 in the micro-lettering around the rim.