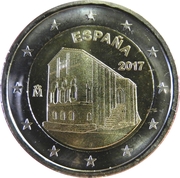 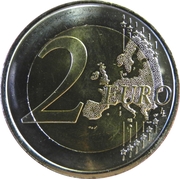 Churches of the Kingdom of Asturias.

The design depicts in the foreground Santa Maria del Naranco Church. At the top of the inner circle and in circular sense is the name of the issuing country 'ESPAÑA' and underneath, to the right, the year of issuance '2017'. At the left side of the inner circle is the mint mark. The coin's outer ring depicts the 12 stars of the European flag.

The Kingdom of Asturias remained the only Christian region of Spain in the 9th century. It developed its own style of Pre-Romanesque art and architecture that is displayed in various churches and other monuments. The original entry titled "Churches of the Kingdom of the Asturias" and was extended to include other monuments such as La Foncalada.
The church of St Mary at Mount Naranco is a pre-Romanesque Asturian building on the slope of Mount Naranco situated 3 kilometres from Oviedo, northern Spain. Ramiro I of Asturias ordered it to be built as a royal palace, part of a larger complex that also incorporated the nearby church of San Miguel de Lillo, 100 meters away. The palace was completed in 842 and had in part a religious function, being consecrated in 848.