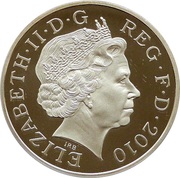 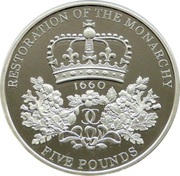 350th anniversary of the Restoration of the Monarchy

Lettering: A QUIET AND PEACEABLE POSSESSION

Issued as part of the Annual Silver Coin Sets for 2010, as well as individually. This design was also struck in copper-nickel, silver piedfort, gold proof and platinum piedfort.
Issue limit: 20,000 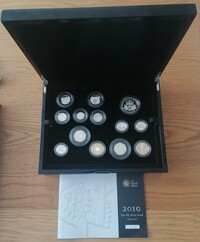 Bullion value: USD 19.61 Search tips
This value is given for information purpose only. It is based on a price of silver at 750 USD/kg. Numista does not buy or sell coins or metal.