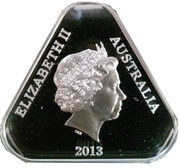 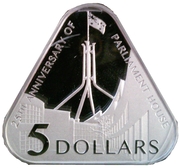 Stylised depiction of the Australian Parliament House with Flag flying above

First coin in a series of Triangular $5 coins released by the Royal Australian Mint. This coin celebrates the 25th Anniversary of the opening of the new Australian Parliament House in Canberra, ACT.

Bullion value: 18.43 USD Search tips
This value is given for information purpose only. It is based on a price of silver at 830 USD/kg. Numista does not buy or sell coins or metal.