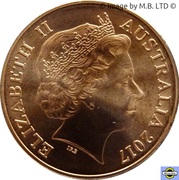 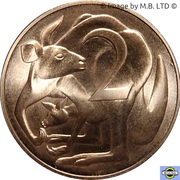 Kangaroo with Joey in pouch - Value

Released by the RAM on a coincard this alternative version of the now de-monetised 2 cent coin celebrates the enduring appeal of all the designs on the original decimal coins designed by Stuart Devlin. This coin is based on one of the many original 1966 concepts that Stuart put forward as reverses on Australian coins. While the frill-necked lizard design eventually won out, this alternative design featuring a Kangaroo and Joey has stood the test of time.