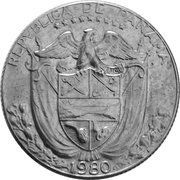 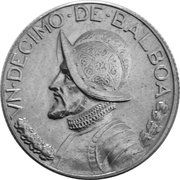 Coat of arms of Panama with 9 stars, legend above and wreath and date below.

Armoured bust of Vasco Nunez de Balboa facing left with wreath below and denomination above. The bust touches the rim.

Translation: One-tenth of a Balboa

Balboa was a Spaniard, first European who crossed the Isthmus, reached the Pacific by land and discovered the Perlas Archipelago (1513). The 9 stars represent the 9 provinces of the country at that time (there are now 10).
Variants: Type I thick flan with diamonds on both sides of the "DE" of value,  was minted in London; Type II, thin flan, elongated diamonds,  was minted in San Francisco. There is a third type with thick flan and lines around the "DE": 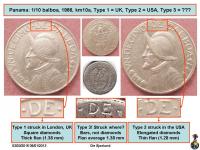 A 1975 proof issue has been reported, but not confirmed.