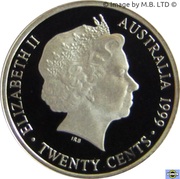 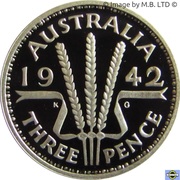 The reverse of this stunning coin is a replica of the original rare Melbourne Mint 1942 Silver Threepence of which only 528,000 were made. However, the obverse has the 1998 Ian Rank-Broadley fourth Portrait of Queen Elizabeth the Second, unlike the original coin which had a Portrait of King George VI facing left.

Bullion value: 2.63 USD Search tips
This value is given for information purpose only. It is based on a price of silver at 882 USD/kg. Numista does not buy or sell coins or metal.