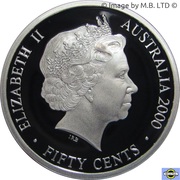 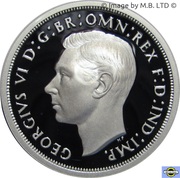 This NCLT Fine Silver (.999) coin was released by the Royal Australian Mint in 2000 as part of that years "Masterpieces in Silver" set. The theme for the set featured Monarchs of the 20th Century.
The reverse of the coin is based on the 1937/38 King George VI Crown obverse.
The obverse of the coin carries the Ian Rank-Broadley fourth effigy of Queen Elizabeth II.
The coin is the size and shape of a modern Australian NCLT $5 coin and has a decimal face value of  50 cents.

Bullion value: 29.78 USD Search tips
This value is given for information purpose only. It is based on a price of silver at 821 USD/kg. Numista does not buy or sell coins or metal.