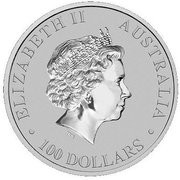 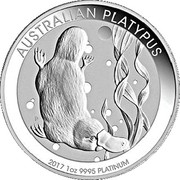 Issued by the Perth Mint in 2011 and each following year is this Platinum Bullion Coin featuring a Platypus. The Platypus is one of only two mammals that lay eggs and is correctly classified as a Montreme.

The series was discontinued in 2017.

Bullion value: 1,219.36 USD Search tips
This value is given for information purpose only. It is based on a price of platinum at 39,202 USD/kg. Numista does not buy or sell coins or metal.