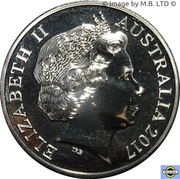 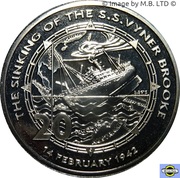 Depiction of the ship SS Vyner Brooke sinking, set against a map of the South China Sea. China to the north, Malaysia to the west, Australia to the south. Co-ordinates of the sinking shown.
All the above set within a ships compass.

This NCLT 20 cent coin was released in a coincard by the Royal Australian Mint to commemorate the 75th anniversary of the sinking of the ship S.S. Vyner Brooke on the 14th of February 1942 by Japanese forces.

The ship was in the course of evacuating nurses and wounded soldiers away from the beleaguered island of Singapore. About 150 survivors eventually made it to Radji Beach on Banka Island where they were taken prisoner of war. Japanese troops shot and bayoneted the soldiers and ordered 22 Australian Nurses into the water where they were machine-gunned from behind. Vivian Bullwinkel was one of just two survivors. After hiding in nearby jungle for several days she surrendered to Japanese forces that knew nothing of the massacre and spent the remainder of the war in captivity.