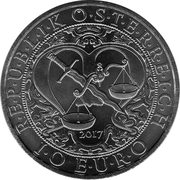 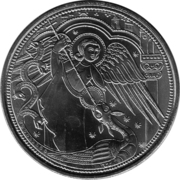 Sword with a corrugated blade, crosses with a scale, both are symbols of Saint Michael. Letter "M" in the background, framed by a leaf ornament.

Archangel Michael features on the first coin in the austrian talismanic new Heavenly Messengers.
Through the ages and across many faiths people have looked to angels for protection. Worshipped by Christians, Jews and Moslems alike, these benevolent but invisible spirits have been widely depicted throughout art history.
Issue date: 2017, 22th of february, only brillant uncirculated in mint folder:

A member of this site wants to exchange it: boule02de

Bullion value: 12.93 USD Search tips
This value is given for information purpose only. It is based on a price of silver at 831 USD/kg. Numista does not buy or sell coins or metal.